Well, as you may have guessed from the title, Lake View will never be making it out the box now, I've decided due to finances and space that I really don't have the time or the money to do it, let alone no space to actually put it if I did complete it, so have taken the decision to try and sell it, i've put it on gumtree and a local facebook group in the hope that somebody will buy it.  Haven't put it on  ebay yet but no doubt it will end up on there on their next free listing day, hate ebay as it costs so much.   Don't think it would be viable to actually courier it anyway as it's 3 huge boxes which would cost a fortune to post, so it's got to be somebody local, just hope that I can sell it!

Anyway, had a little break from mini patchworks, all patchworked out, but made a gorgeous teddy bear, who is so soft which unfortunately you can't see from the pictures. 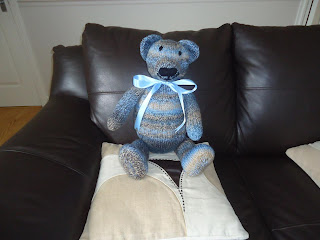 No idea what will happen to this bear, probably end up on ebay!

Just doing some little mini knitting, a baby romper suit, hat and bootees, not finished yet so will post pics when it's done.

Anyway that's about it for now, nothing new happening here!

Have been busy making 2 more mini patchworks for my dear friend Paula, have now finished them and they will be making their way to Scotland next week!

They do take a long time to make as I still make them the old fashioned way, cutting squares then cutting papers and tacking the papers in the squares then sewing them all together and taking the tacking and papers out (not my favourite job!) and then backing and binding them.  I do think they are very cute though, each square is approx 0.75cm and it takes an average of 170 to make a single sized quilt!  Now that's a lot of hand sewing!

And here they are! 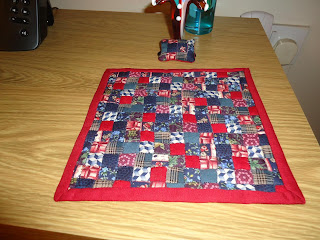 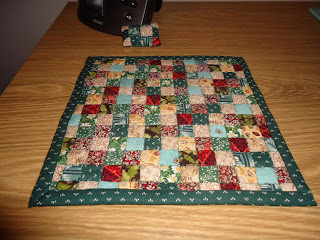 Should really be starting Lake View now, but it's still sitting in the cupboard!  My excuse is I need the kitchen table tomorrow for a family Sunday dinner lol.

Still haven't done anything with Beacon either, but lack of funds is stopping that.  Oh I wish I was rich!

Anyway I had bought some wool a while ago and am knitting a teddy (full size) at the moment, now I never know how they are going to turn out, so time will tell!

That's about it for now, back to the knitting, it's quite nice to be able to do something without having to wear my glasses, that's the good thing about full size stuff, not quite so reliant on glasses!
Posted by debbie1608 at Saturday, March 16, 2013 No comments:

Email ThisBlogThis!Share to TwitterShare to FacebookShare to Pinterest
Labels: Patchwork

Have just finished another little patchwork for Julie (the lady who makes the lovely dollshouses) for one of her little cottages.  She saw the one I did for Paula and asked if I could do a similar one, I am quite enjoying making the little patchworks at the moment even though they are fiddly and time consuming I do get a certain satisfaction from seeing them completed and in their new homes.

Here is the finished quilt 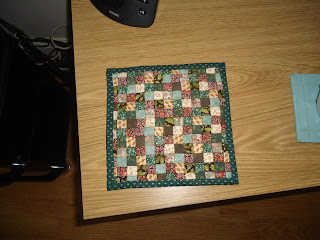