Thought it was a long time since I updated my blog last time, but this time i've been even worse, can't believe it's been nearly 2 months!  I just don't know where the time goes!  Well I do, it's called life!  We've had weddings, birthdays, etc. and just general life and mundane things in general!

I'm still on my weight loss kick and have now lost 5stone 13.5lbs, and that's been keeping me busy, although I don't really know why!

Anyway, enough excuses, what has been happening?

Well Lobster Pot Cottage is finally on it's way to my bestest friend Paula, I know it will be well loved and given a gorgeous makeover when she gets her hands on it!  I sort of lost interest in it when I moved the tea rooms to Cove, and it just sat in the middle looking very out of place!  So i'm not really sad to see it go but very happy that Paula is going to love it!

I've decided that no more dollshouses for me, ha, well that was until I spied Paula's pretty pink shop, so am in a quandary now!

I did actually buy some bits and pieces for Beacon, the downstairs is going to be a haberdashery/wool/craft shop.  Just bought the furniture, have got to pretty it up as the dresser is bare wood, so needs painting and papering and generally making it look nice.  As there's not much room have just got a counter/display in the middle with a few white wire shelf units to put things on, there's not a vast amount of room so have to be careful, i've got a wicker chair in there at the moment as well, mainly because I didn't want to get rid of it, but not got anywhere to put it either!  Got to make a heap of little boxes to put things like buttons, cottons, etc. etc., in and can't say i'm looking forward to doing that all that much, that sort of thing doesn't float my boat!  But on a tight budget so got to be done, sure i can find template for the right sort of box, I can never work these things out!  I did get some pretty papers (not dollshouse, but think they'll do) in a "freebie" from hobbycraft so hope to make them out of that, they don't need to be strong boxes just strong enough to make things in, if not the paper can be stuck to the card and the boxes made out of that.  Anyway here's a picture of Beacon so far 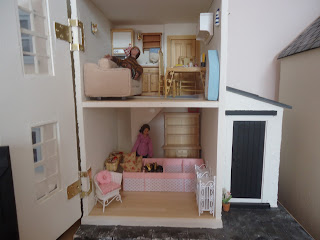 Think i'm quite happy with the upstairs, and to be honest there's not a lot of room for much else up there lol, so it's just the downstairs.  I've still got to sort my little shabby shop out again, now i've rescued it from the cats, it's just sitting under a table at the moment, i must sort it out though.  Just reminded me seein the doll in Beacon cos i'm pretty sure she is from the shop and that i just rescued her from the shop and she ended up in beacon!  Still nothing in the little annexe for beacon, still don't really know what to put in there, there's not much room at all in there so it can't be much!

I seem to have been busy knitting bears and baby clothes recently, not had a lot of time for mini knitting or quilting.  Did a little bit of mini knitting (my worst nightmare doll lol, and some xmas stockings) and that's been about it on the mini front. 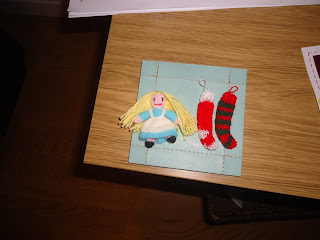 The rest of my time has been knitting baby/reborn baby clothes.  I am quite enjoying doing these, but the reborn dolls that I spent so much on, I have to say have remained in their boxes in the wardrobe!  I am seriously thinking about selling them, lovely as they are, not much point in keeping them if they are in their boxes hidden! 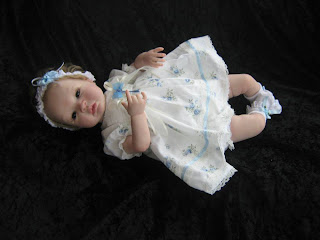 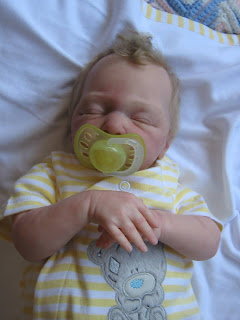 These are the reborns and I have to say they are amazing!  All handpainted and have rooted hair, beautiful really. 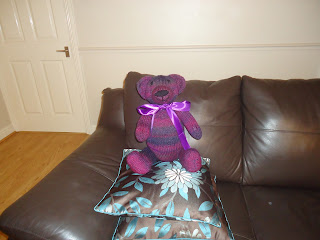 This is the latest bear that i've made, he was a custom order to co-ordinate with a bedroom. 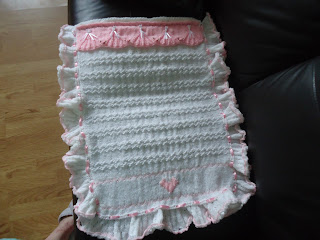 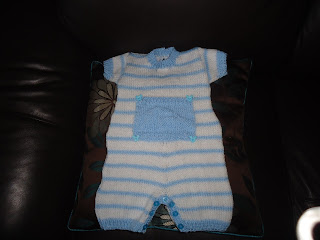 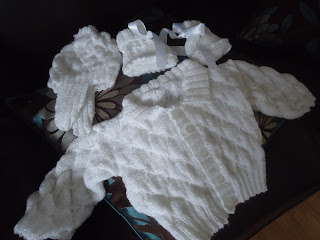 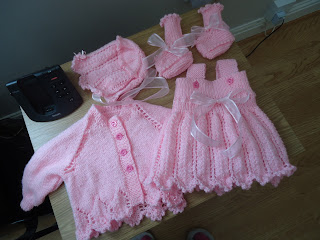 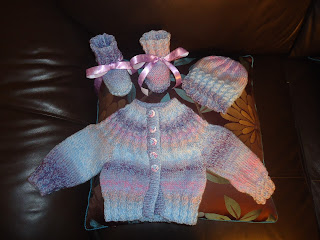 Well that's enough of that!

I have a yearning to make a new mini patchwork, not sure what, but probably a pretty flowery one or a cath kidston one.  Will finish the custom baby outfit i'm doing and then may give it a go!  Think i'm being inspired by myself lol, fingers crossed a "how to" tutorial I did at the request of DHMS magazine should be in the November issue, well it was meant to be in the October issue, but they had to put it back, so it might not be in November's, it could be next year or it could be never lol, but i was very flattered to be asked to do one, I was just going to start on a quilt for a lady so I used that one in the tutorial pics.  I thought it would be easy, how wrong was I!   Not that easy to explain in words, so whether it will make real sense or not remains to be seen!  Anyway I will let you know if it does get printed.

Right, well it's getting late and i seem to have been rambling for yonks!  Must not leave it so long!