As promised here's a couple of piccies of the upstairs of Beacon.   I've pinched most of the stuff from the Pavillion Holiday let, which unfortunately has been languishing unloved on a table, and mainly used as a hat, gloves and scarf peg!  I've never really been a fan of the pavillion, have redone it and still don't like it, so unfortunately it is in the dustbin now!  The windows and doors had broken and it really wasn't any use for anything, so out it must go!

Anyway, as you can see have most of the things in Beacon and the rest of the stuff i'll be selling on my fb page or ebay, seem to accumulated a few bits and pieces and now I'm trying to sell Lake View I really don't need them.

Anyway, back to Beacon!

The upstairs i've turned into a sort of bedsit, well more a chair sit really!  Couldn't fit a bed in there or the settee, it's quite a narrow little property so not that much room, but we've got a bit of a kitchen, table and armchair, plus the lovely little boat shelf unit that Paula made for me and of course the gorgeous doll, who I can't decide on a name and i must knit him some more clothes as well!  He must be quite smelly in the same jumper day and night!

The downstairs is still bare as is the annexe, i'm hoping to make these into a shop and workroom for handicrafts, but need to sell some stuff before I can buy some shop units and shelves.

Here it is anyway! 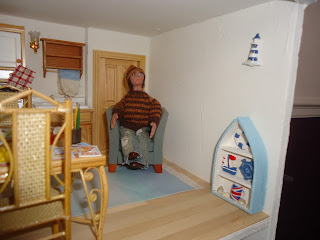 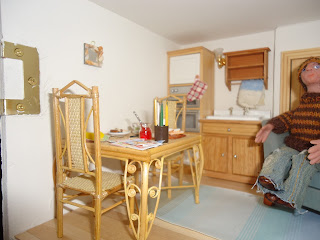 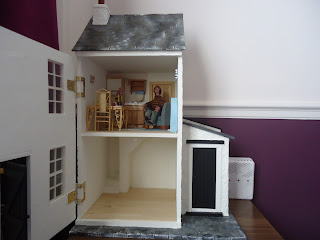 Seem to have been busy with making the mini patchwork quilts just recently.  Have just completed these two, one for Paula and one for a lady she knows, they will be winging their way up to Scotland tomorrow when I get down to the shops.


Otherwise I haven't really done that much else!  Started knitting another of my favourite teddies, I love knitting these and have got quite a collection now, shame they're not mini as they take up quite a lot of room!  I will have to get my act together and get them on ebay!

I've just got another order for another mini quilt so will be starting that next week as well.

Still got Lake View and the Garden Room as nobody seems to want it, typical now that i've decided I really don't want to do it and just want it out the way.  My listing ends tomorrow so I shall stick it on again, but will offer a courier service as well, it looks like it will cost about £30 for all 3 boxes together, so hopefully that won't deter people too much!

I have had a little play with Beacon this week and will take a pic and post it later.  I've kitted out the upstairs as a little bedsit, the downstairs I haven't started on.  I think that will be a sort of handicraft shop, taking in all the various little crafts that I do, e.g. knitting, patchworking, cross stitching etc.  Once I've sold Lake View i'll be able to buy some counters etc., hoping that I can make most of the things that will go in the shop, the little annexe will still be a workroom (I did try and fit a shower etc. in there, but it's not really big enough) so a workroom it will be!  Was quite nice having a play, seem to have been neglecting things recently!

I dismantled my holiday let (the pavillion) as it's just languishing on a little table in the hall and i'm afraid i'm in the habit of dumping bags, hats etc on it, i've never really liked it to be honest so i took everything out and most of it is in the new bedsit!  A few other bits I managed to rehome in Lobster and Driftwood, and there's just a few bits that are too big for Beacon, mainly a bedroom set so they will shortly go on ebay!

That's about all my news for now, will try and take some pics over the weekend of Beacon.
Posted by debbie1608 at Friday, April 19, 2013 1 comment: